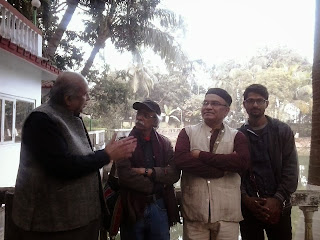 A celebrated poet of Hindi Literature and an ace personality who led his whole life dedicated to art and culture, Manik Bachhawat is the senior-most Trustee of the Bachhawat Foundation. Manik Bachhawat had a keen interest in contemporary visual arts and has been one of the promising collectors of paintings since 1960s. His aim was not as an investor in art as it is termed in the present millennium, but as a true admirer of art and its beauty he was one of the key figures to bring together the artists of his generation who are among the most acclaimed artists of the century from this part of the country and supported them in every possible way to continue their art practice. Among his published literary works, both in poetry and prose, the notable ones are “Neem Ki Chhanh” (1960), “Ek Tukra Aadmi” (1967”, “Tum Aao Meri Kavita Mein” (2000), “Pahachan” (2012), “Sarak par Jindagee” (2012) in the poetry section and “Jooluso ka Sahar” (1973), “Aadam Sawar” (1976), “Yeh Kritistambh” (2011), “Bhaartiya Naariyaan” (2012) in prose. He has also been the editor of important publications like “”Akchhar” – a poetry magazine from 1965-1970, “Kaveeta is samay” (2006), Sansmarano ki Duniyaa (2011).  Apart from writing poetry Manik Bachhawat has regularly done art criticisms for esteemed publications during 1960s and 1970s and has remained an integral part of the art circuit of the country since almost last fifty years. Manik Bachhawat’s contribution in the art and literature world is unparallel. Manik Bachhawat has been awarded by the former President of India, Dr. APJ Abdul Kalam for his contribution in the field of literature in 2006. He is also the recipient of the “Rashtrakavi Maitheleesharan Gupt Shiromoni Puraskar” in 2010 and “Nayee Dhara Rachna Puraskar” in 2012 from this Hindi Publication based in Patna. 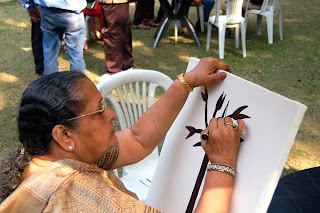 Panne Kunwar is a noted artist, born in Bikaner and came to Kolkata after she got married to Manik Bachhawat. With a fine exposure in traditional folk art, she started working on her own, expressing her thoughts in the folk style. Being a part of the Bachhawat family, she was embraced in the world of art and practiced in her own way amid her daily chores in the household activities. With a vivid treatment of the primary colours - green, blue, red and blue the beauty of her paintings lay in the personal interpretations of Indian mythological characters, idols, deities. She has used oil painting as one of the primary mediums in her works. Her works are simple, attractive, colourful and vibrant and have been exhibited in different galleries both in India and abroad. And as one of the senior most members of the Bachhawat family, she will now contribute to the formation and support the activities of the Bachhawat Foundation as a Trustee member. 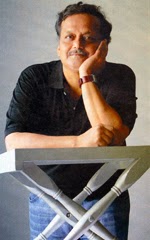 Amitabh Bachhawat’s journey into the art world though started at his home surrounded by dignified personalities of visual arts and literature, but he set his discourse in a slightly different way. He did not take up the conventional path of either becoming a visual artist or a writer like his father, nor did he formally intended to set up a gallery like his younger brother and sail in the boat to patron art. Amitabh had a strong creative instinct, natural intelligence, an urge to do something original yet which would be of so much use in every sphere of life and living. Thus Amitabh chose furniture as his medium of expressing creativity. He is one of the finest furniture designers in town with a fantastic taste of raw materials. He deals with the designing and export business of hand-made wooden furniture and in the list of his worthiest accomplishments, his designed furniture have been used in the most acclaimed Hollywood films of our times – Harry Porter. Amitabh has always been his brother, Vikram Bachhawat’s protective shadow in all his artistic endeavours and now he too is one of the Trustees of Bachhawat Foundation. 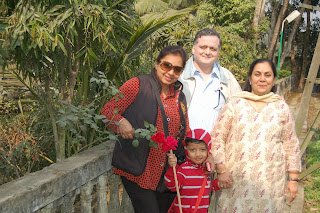 With a very promising creative mindset, Madhu Bachhawat has been an active member in the Bachhawat family dealing with art, aesthetics and culture through her various contributions. She mostly deals with the concepts of furniture designing and their execution. Madhu has a very refined taste and exactly knows what fits with what. She can visualize an entire setup of furniture at par with the space provided along with the introspection into the finest detailing in each item of the furniture. Madhu supports the family and the furniture business side-by-side and as a diligent daughter-in-law of the Bachhawat family, she too holds a strong voice in the promotion of art in any form and of every kind. Madhu Bachhwat also holds a Trustee position of the Bachhawat Foundation. 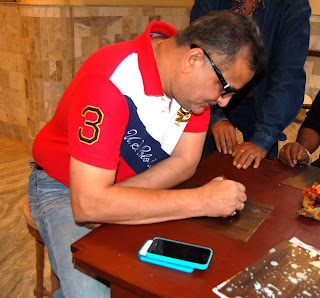 The man whose biggest mission is to hone young creative potentials getting lost in the hoopla and hype of the consumerist culture, Vikram Bachhawat gave birth to Aakriti Art Gallery in 2005 – the art hub that has been revolutionary in giving a facelift to contemporary Indian art and endorsing young talented artists from all over the country.This ofcourse was well after  Vikram set up Konark Collectables which even today holds a prime and leading spot in the Kolkata market . Vikram has been the mastermind behind the most happening things in the art circuit in the City of Joy in the last decade. From conceptualizing off-beat exhibitions based on socio-political ethos to being the propagator of Gen Next artists, Vikram has proved to be the worthy heir of Poet Manik Bachhawat who himself states with his evergreen smile that he was born with art, and thus he had nothing else to do to except living with art. Vikram is the pivotal force in Bengal’s art chapter who has very ably brought together eminent and new artists, senior established practitioners rubbing shoulders with young innovative minds and Aakriti has set milestone contributions in the field of art. Not only Aakriti Art Gallery, Vikram Bachhawat was instrumental in the formation of the Emami Chisel Arts, where Chisel arts collaborated with the Emami group to form one of the biggest galleries in Kolkata which got its unique establishment as the city’s one and only Auction House. Vikram was also the key figure behind both the major auctions held in Kolkata at the Emami Chisel Arts in one of which a Husain painting crossed 1 Million Dollar  figure which was a historical record, breaking all the previous records. In the same league of actions, Bachhawat Foundation is another addition in Vikram’s venture which he vouches to diligently bring forth great accomplishments in the years to come… 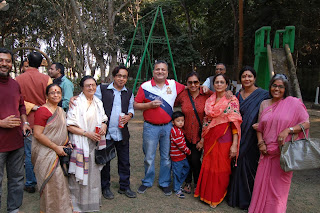 A deep sense of visual imagery, an amateur photographer and a wise marketer, Priya Bachhawat looks after the gallery sales of the Aakriti Art Gallery. She is one of the Directors of the Aakriti Art Gallery also taking care of its administration and organization of events during different exhibitions and workshops, seminars and other affairs regularly taking place in the gallery since its inception. As Vikram Bachhawat’s life partner, Priya has looked after the gallery and its different chores just like her baby and in every decision of Vikram she has remained his prime support and follower. Priya has been the prime photographer who has shot most of the images for the exhibition catalogs, auction catalogs and books published by Aakriti Art Gallery and Chisel Arts and also she has been giving inputs to the designing of the catalogs with her technical skills and knowledge. With her charming personality Priya has taken care of all enterprising missions of the gallery taking it to one of the leading positions in the country in terms of sales as well and she too holds a key position in the board of Trustees of Bachhawat Foundation. 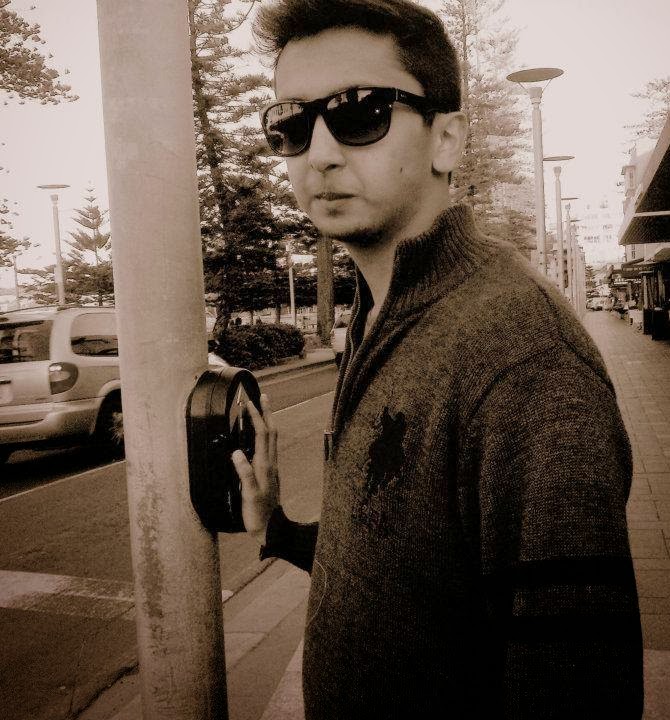 Aman Bachhawat is one of the youngest members of the Bachhwat family who is also one of the Trustees of the Bachhawat Foundation. Aman has a fine taste in different art and craft materials and holds one of the key positions in the traditional business of the Bachhawats. Aman Bachhawat is the Director of the Konark Collectables, the famous hub of Kolkata dealing with curio's, collectibles and art objects and various vintage pieces which are one of their kind. Aman with his dynamic capability of entrepreneurship and fine business skills looks forward to lead Konark Collectables as an outstanding benchmark of finest collectable art. He too believes in the collective growth of the art, artists, curators, critics, collectors and patrons together and as a part of the Bachhawat Foundation, he vouches to contribute his best to lead it forward as well.
Email ThisBlogThis!Share to TwitterShare to FacebookShare to Pinterest